Music Therapy can help children with Autism Spectrum Disorder improve social skills, communication skills and encourage appropriate expression of emotions. It’s a risk free and non-drug approach and is one solution, which is customized for each child based on their needs. Clarice Lee, MT-BC who is a board-certified Music Therapist with a Music degree from the University of Miami Frost School of Music is developing the program at the Miami Conservatory of Music in Coconut Grove.

“This is an important resource for the community and provides parents and children with a structured program,” according to Brigitte Kishlar, who is the founder of the Miami Conservatory of Music. “Professor Lee doubled majored in Neurologic Music Therapy and Psychology and enjoys working with special needs children.”

Therapy is available on an individual basis and lasts from 30-45 minutes.  Most children participate in 1-2 sessions a week. Group sessions may be available in the future.  All instruments and materials are provided by the Conservatory. No music experience or skills are required. Children are evaluated at the start and input from parents is also used to determine what course the therapy will take. Children may play instruments or sing or the therapist will perform and the child will interact.  Parents are invited to participate in sessions as this can help with techniques and support when they are at home.

“We outline target specific goals and objectives and parents are provided documentation to show progress and we design our approach to reinforce academic skills being learned in school and specific areas parents want to improve on such as cognitive skills,” Professor Lee says. “Besides offering solutions for social skills and communication we hope to nurture a love of music.”

The conservatory also provides adaptive music lessons taught by specially trained music educators in various instruments. The Music Therapy program is available for all ages.  For more information and to take a tour of the facility please call 305-442-2283 or e-mail the conservatory at info@mcofm.org. 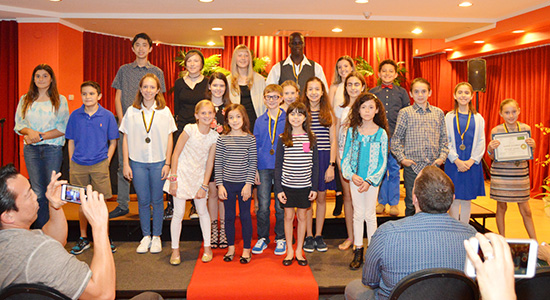 All of last year’s winners.

The Sixth Annual La Plume Young Writers’ Contest will host their awards ceremony and book signing on Saturday, December 2 from 5-7 pm at the Miami Conservatory of Music Recital Hall at 2911 Grand Avenue. The ceremony is open to the public. More than 120 students from grades 3-12 who attend Miami Dade County schools entered the contest this year and wrote short stories based on any topic they desired ranging from 1,000 (elementary) to 4,000 words (middle and high school).

Students have the summer to write their stories on themes drawn on their life experiences, inspirations, dreams and personal knowledge for review by a panel of judges that include published writers, editors, actors, journalists, librarians, educators/professors, and artists. The Grand Prize Winner in each level is given a $150 to $350 cash prize and has the story published. Cash and other prizes will be awarded to the 1st, 2nd and 3rd place winners for each level (Elementary, Middle and High School). During the next academic year, all the winners and finalists are offered free Creative Writing Workshops conducted by a published author.

The La Plume contest was created by the Miami Conservatory of Music, the Bookstore in the Grove and MCA academy in 2011 to encourage young writers attending Coconut Grove schools to express themselves and to provide an opportunity for students to have their work evaluated professionally and published. In 2015 the contest was expanded to include all Miami Dade County school students.

“La Plume has been well received by students and teachers over the years,” according to Brigitte Kishlar, president and founder of the Miami Conservatory of Music and founder of MCA academy. “We’re pleased with the expansion of the contest countywide resulting in a wide spectrum of students with different backgrounds and cultures submitted some very original and engaging compositions.”

This Saturday, March 14, the Faculty Concert is being held at the Miami Conservatory of Music.
Enjoy an afternoon of musical enjoyment as their professors sing and play some wonderful pieces. You’ll hear classic guitar, opera arias, show tunes, classical and modern music.

The concert is in the recital hall. MCM is located at Florida Avenue at the Mayfair Promenade.

To get your free tickets please go to: miamiconservatoryofmusic.com or call 305-442-2283.

The show starts at 4 pm.

Founder and President, who was awarded “Entrepreneur of the Year” by the Coconut Grove Chamber of Commerce, prize given for excellence in business and to people whose efforts make the community better and brighter. Click link for full article

Children will enjoy and get exposed to a diverse range of piano stylings when the award-winning duo Kirk Whipple and Marilyn Morales take the stage at the Miami Conservatory of Music Recital Hall in Coconut Grove at 3:30 pm on Saturday, April 11.  That and they’ll enjoy snacks, an optional baking class and an instrument petting zoo as part of a “concert in three acts of music, food and education” specifically created for young people by Anne Chiheportiche of Musimelange. Read full article at Coconut Grove Times

Gala for Two Pianos to be held at Conservatory

On Saturday, February 28,  The Conservatory is proudly presenting the Gala For Two Pianos. In past Galas, the internationally recognized team of Kirk Whipple & Marilyn Morales (left), Duo Pianists & Composers, along with a thrilling array of renowned guest artists performed world premiers original works and arrangements, as well as beloved traditional pieces, to enthusiastic local audiences.

The concert will include:

Other works for one piano / 4 hands and vocals.

Get your tickets on the Miami Conservatory website, miamiconservatoryofmusic.com, or available at the door 30 minutes before the concert ($5 more).

Featured in the Coconut Grove Grapevine on June 19, 2013.

Rose Max, South Florida’s popular Brazilian singer and jazz stylist will headline this year’s Fete de la Musique Coconut Grove on Friday, June 21 from 7 to 11 pm.  Rose started singing with the Octeto Rio Orchestra in Rio de Janeiro nightspots and backed up some of Brazils most renowned singers before moving to Miami in 1993. She and Ramatis Moraes will play jazz, bossa nova and samba at LuLu’s on Commodore Plaza and Main Highway in Coconut Grove from 7-10 pm.  Down the street at Jaguar Café, jazz aficionados will be able to hear Latin Grammy winner Federico Britos (above) as the jazz violinist and his trio perform classic and Nuevo jazz as well as global music.

The viola is sometimes viewed as the neglected child of the string family, often assigned inner lines and figuration in chamber and orchestral scores.  2011 has proved a banner year for the instrument in South Florida. A superb recital in April by Yuri Bashmet and Kim Kashkashian’s recent program of works by America composers for SoBe Arts’ American Masterworks Festival displayed the instrument’s range and versatility to impressive effect. Violist Nathan Schram and pianist Marina Radiushina, both members of New York’s esteemed Ensemble ACJW, presented a varied program Friday night at the recital hall of the Miami Conservatory of Music in Coconut Grove.

David Fernandez, a student of Prof. Andres Trujillo, won First Price at the Ray Millete Concerto Competition. He was featured among the Young Winners of this comepetition last Sunday, April 17, at the last Alhambra Orchestra Concert “South Florida’s Got Talent”.

It was a lively mixing of performance art and music

Featured in the Coconut Grove Grapevine on Sunday, June 05, 2011.

The event brought a lot of new faces out for Gallery Walk and many of the other gallery owners left their gallery for a bit to check out the performance. It’s something that will be repeated again maybe in other areas of the Grove, so that everyone gets a little piece of culture. As someone told me, it’s more than just about the art, it’s about the community involvement and the mixing and mingling of friends and the whole live scene.

An afternoon of culture envelopes the cool fall days

Featured in the Coconut Grove Grapevine on Sunday, November 7, 2010.

Looks like a new trend is starting on Gallery Walk days, the music is starting early. The Windisch-Hunt Gallery held the Peace Flags Concert and at the same time, the Miami Conservatory of Music had classical music performances right outside their school, beside the water fountain.

A touch of class added to Gallery Walk night

Featured in the Coconut Grove Grapevine on October 4, 2010.

The Miami Conservatory of Music added a lot of high-end culture to Saturday night’s Gallery Walk. They had performances all night at their end of the Mayfair Promenade, which is a little world unto itself. Alain Orbiz on cello, Andres Trujillo on violin and Jose Alfredo Fernandez on guitar enchanged the audience.

Singin’ and playin’ in the rain

Featured in the Coconut Grove Grapevine on Monday, August 20, 2010.

The Miami Conservatory of Music opened right on schedule last week, for the first day of school. There’s a lot of orange coming from that building now, along with lots of music and talent.

Mayfair is welcoming the sound of sweet music

Featured in the Coconut Grove Grapevine on Wednesday, August 18, 2010.

There will be a lot of music emanating from the Mayfair Promenade starting next week, because the Miami Conservatory of Music is moving in. They’re coming from Oak Avenue, just a block away.

My son has been taking violin ...

“The location is fantast...